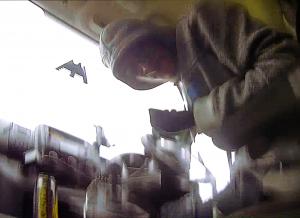 A&nbspblundering&nbspthief&nbspwas&nbspframed&nbspwhen he inadvertently recorded himself trying to remove a 3G vehicle camera and tracking system from a stolen Renault Traffic van. The van, fitted with Intelligent Telematics’ IT1000 device, was taken while parked in Fincham, Liverpool, and driven to a field behind houses in the Huyton area. However, Merseyside Police was able quickly locate the vehicle using tracking date and then use footage to confirm the identity of the thief.

Intelligent Telematics was contacted by Police investigating the theft of the van and used the vehicle tracking system to direct officers to the concealed location. Meanwhile, the attempt to detach and disconnect the camera from the windscreen had triggered a recording to be uploaded to an online portal, which when slowed down caught the thief in action. As a result, Intelligent Telematics was able to describe him in a grey tracksuit with the hood up wearing gloves, which matched a male suspect earlier taken into custody.

Justin White, Managing Director of Intelligent Telematics commented: “This latest incident demonstrates the value of our all-in-one 3G vehicle camera and fleet tracking tool, which is helping businesses better protect, monitor and manage their fleet operations in the most simple and effective manner. We were able to work closely with the Police to provide all the necessary information to locate and recover the vehicle, as well as historical data and footage to ensure the suspect was correctly arrested.”

The IT 1000 is the most sophisticated 3G vehicle camera solution currently available with unrivalled accuracy and technology that is sixteen times more powerful than existing solutions in the marketplace. The forward facing device transmits footage of accidents and near misses via a secure 3G private network to a web-based interface with live email and SMS alerts, so a triggered event can be viewed almost immediately.