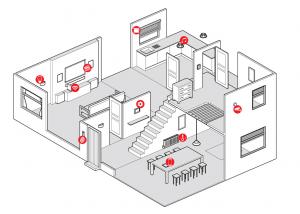 Home automation is moving towards becoming the norm

Home&nbspautomation&nbspis moving towards becoming the norm, rather than the exception, for new properties. This is the view of a new whitepaper from Ingeny, the home automation division of Interphone, which suggests that moving forward housebuilders and developers will need to have a clear understanding of the most up-to-date technologies as they become available for installation in new homes. In fact, the construction industry can increasingly expect a growing number of enquiries from clients – both prospective buyers of new properties and the residential developers of multiple dwelling units – regarding the options that are available.

The whitepaper outlines a range of reasons for the rising interest in home automation and why it is seen as an integral element of the growing Internet of Things (IoT) and Smart Living agendas:

- Greater affordability, thanks to developments in technology that are opening up new markets

A range of considerations and issues are discussed in order to provide some insight into the current status of home automation and generate debate amongst those within the construction sector that it is likely to effect in the future.

The whitepaper, titled home automation and smart living – building for the future can be downloaded here: http://ingeny.co.uk/white-paper.