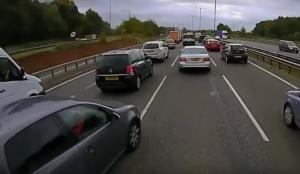 Minor&nbsproad&nbspcollisions&nbspare&nbspcosting HGV fleets many thousands of pounds because of the difficulty of proving liability and the high risk of fake personal injury claims. Video footage recorded by Intelligent Telematics’ IT1000 3G vehicle camera highlighted the difficulties faced by road transport operators recently when it captured the moment a car clips an HGV operated by retailer Poundworld on the M60 near Prestwich, Greater Manchester. Such incidents are occurring across the UK, often resulting in fraudulent claims against HGVs and increased insurance costs to the companies involved.

“The 3G vehicle camera protects us against other road users making a fictitious claim following a collision such as this one,” explains Mark Heathershaw, National Transport Manager at Poundworld. “Without any definitive evidence, insurance companies often settle in favour of the motorist, which would have previously resulted in us paying the £1,000 excess and facing increased premiums when our policy came up for renewal. In this instance, we were immediately able to prove liability and report the car driver to the police for failing to stop at the scene of an accident.”

Poundworld fitted Intelligent Telematics’ IT1000 3G vehicle cameras across a fleet of 48 HGVs in September this year to reduce insurance costs and increase road safety. The vehicles travel more than 100,000 each week delivering to a network of over 300 stores nationwide, so the installation of the camera devices was designed to increase visibility of any collisions, near misses and harsh driving events.

Mark Heathershaw went onto say: “Bumps and scrapes can have a significant impact on our insurance costs, so we are using the 3G vehicle cameras to mitigate the threat that these minor incidents pose. Poundworld is already seeing the benefits that the IT1000s can provide in terms of controlling our overheads and we anticipate significant savings moving forward.”

Sam Footer, Head of International Business and Strategic Development at Intelligent Telematics commented: “An increasing number of road transport operators are using the video evidence provided by the IT1000 3G vehicle camera to prove liability, reduce third-party costs, protect against fraud and increase road safety. We are seeing insurance claim cost savings of up to 50 per cent as well as an average accident frequency reduction of 45 per cent, which is resulting in a return on investment typically in the first 12 months.”

Intelligent Telematics’ IT1000 is the most sophisticated 3G vehicle camera solution currently available with unrivalled accuracy and technology. The forward-facing device transmits footage of accidents and near misses via a secure 3G private network supported by Telefonica/02 to a web-based interface with live email and SMS alerts, so a triggered event can be viewed almost immediately.

The video footage of the collision can be viewed here.